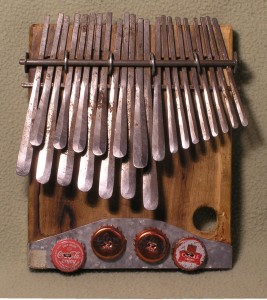 The mbira is a part of a larger family of percussion instruments known as ‘lamellaphones,’ which include many types of mbiras and kalimbas, as well as the ‘Jews harp’ and music boxes.  Each of these instruments is defined by their metal tines, which are plucked.

The mbira dzavadzimu is one type of mbira which originates from  Zimbabwe, and it is played by the Shona people.  Mbira dzavadzimu translates to mean “mbira of the ancestors.”  The instrument consists of 22-28 keys that rest on a hardwood soundboard.  The  instrument sounds eerily similar to the Western major scale, but the intervals between notes are only similar, and may not be precise across different makers.  Likewise, the pitch of the instrument may vary, with what we might hear as tonic being different according to the maker of the instrument.   The sound of the mbira might be seen as warm and inviting.

While one mbira can sound rich in itself, it is common within the tradition for two or more mbiras to play interlocking parts.  Within the ‘repertoire’ of mbira music, these interlocking parts are taught.  Also part of the ensemble are the ‘hosha,’ a set of shakers we might think of as similar to maracas, but played in a unique style.

Mbira music is more than 1,000 years old, and its role in the community is strong.  The primary function of the mbira in Shona culture is to summon the ancestors and spirits of the community to ceremonies and events.   In this way, the mbira plays a communal healing role.

The musical role of mbira is to present rich intertwined melodies based on simple cyclic structures.  Like many other styles of music from Africa, an understanding of the basic cyclic structure eventually gives way to improvisational possibility.

I personally am very new to the mbira, and I am enjoying the learning process.   For more information on the mbira, a great place to check out is here, at mbira.org.

Also, check out the book, The Soul of Mbira, by Paul F. Berliner.