In two previous posts on Rhythmic Acuity (part 1; part 2) regarding series on the rhythmic acuity measurement scale (RAMS), I gave an introduction to rhythmic acuity, and followed up with one of the eight RAMS components, namely fortitude.   In this post, I will discuss another component, namely, orientation.

Much of the world’s “percussion music” is written in varying cyclic forms, meaning that certain rhythms/melodies are played over and over again as accompaniment.   In many of these “percussion music” traditions, not only is the music based on cycles, but the music is not perceived to have a beginning point and endpoint.   This approach to music occurs less in the European “classical” traditions, with one obvious exception existing in some minimalist works, which are often influenced by world musics.

Have you ever experienced a community drumming event or a musical improvisation where what you were hearing, the “order” in which heard everything changed…..even though what was being played did not?   If so, you were receptively experiencing a different “orientation” to the music. 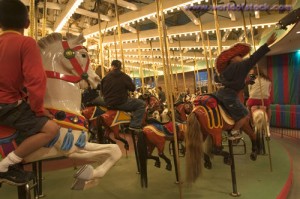 A rhythmic phrase that cycles over and over again is like an old-fashioned merry-go-round.   Look at the young boy in this picture as he tries to grab the golden ring.  When we begin working on our orientation with a rhythmic phrase, such as the son clave rhythm, we first work to align ourselves with that golden ring we perceive as the “downbeat,” as “home.”    When we begin learning a phrase, we may need a prompt or a count in to find that initial point of reference.  Later, once we’ve oriented to the phrase, we can grab at that ‘golden ring’ any time.  But, there’s another level of orientation.  This “merry-go-round” we are riding on has many rings to grab on to.   In fact, there are as many rings as there are notes in the phrase!

When we have completely oriented ourselves to a rhythmic phrase, we are able to enter that rhythm from any note, musically perceiving it and demonstrating it as a cycle, free of beginning and endpoints in itself, and open to musical relationships with whatever else is being played.  By actively engaging and consciously practicing different entry points within the same musical cycle, one can enhance their own musical orientation.

One more of the RAMS components will be discussed soon.