Summer vacation has begun for me….this means time to do some things that have been much less plausible during a busy year of study and teaching.   I’ve had to place my blog postings by the wayside, and am now looking forward to offering a few reflections. 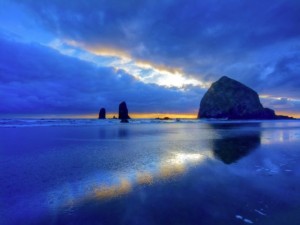 A few weeks ago, Mike Marcionetti and I had a wonderful time working with participants at the MTD Level One Intensive in Rochester, New York, hosted by professor Laurie Keough at Nazareth College.

Every training is, of course, important and unique.  Afterwards, when I reflect on each training, I attempt to locate at least one salient moment that occurred.   Following is, perhaps, the most meaningful moment I encountered at Nazareth.

It was Saturday.  The participants had been sent out to work on a small group exercise; they were putting together their own drumming accompaniment pieces to share with the group later.  In the meantime, Mike and I were walking around to check in with the groups, to answer any questions and offer support if needed.

Two of the groups chose to work outside in the beautiful weather.  They situated themselves near a stairwell that led to the main doorway of the music building.   Their hand drums and frame drums were being used to accompany singing, using traditional techniques to musically frame the sung melodies.

Simultaneously, middle school-aged children and parents would occasionally walk in and out of the building; there was a choir performance in the recital.  It appeared rather casual in nature.

As I made my final pass to each group and encouraged them to wrap up, I noticed something even more impressive than the four women who played drums and sang with authority, confidence, and unadulterated musicality.  I noticed three young girls watching…..but watching is truly an understatement to what I witnessed.  What was telling to me was the intense engagement that accompanied the girls’ so-called passive participation.  Two of the girls were not only moving to the music, but were also seeking to emulate the specific percussion actions they saw.   Air basses and air tones, executed in rhythmically phrased synchronization with the ensemble.  They appeared as immediate students, eyes fixed on the drums being played by four clinicians, smiling.  It was an inspiring event to watch unfold. 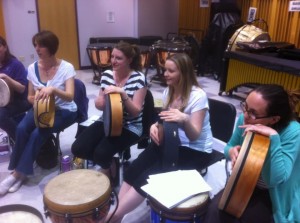 We speak of the power of music in/as therapy, and of our presence.   We have the potential to act that presence in unique circumstances, even in the midst of a training that crosses paths with a choir rehearsal for a few brief moments.

While I do not know the past musical experiences of the three girls, I would not be surprised in the slightest if any of them took this brief encounter and ran with it.   There exists, within the power of confident leadership and confident music, a potential for lasting empowerment, be that in the community or clinic.